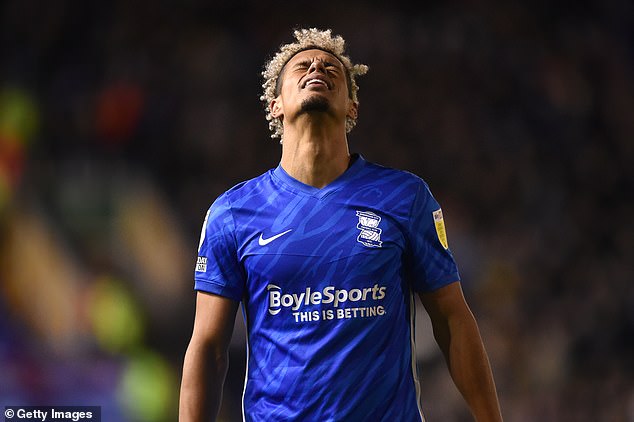 Sheffield United bolstered their play-off hopes by coming from behind to beat Birmingham 2-1 at St Andrew’s in another game that drew protests from Blues fans.

Lyle Taylor’s second goal since arriving on loan from Nottingham Forest opened the scoring in the second half before the Blades turned the tide through goals from Billy Sharp and Jayden Bogle.

Home fans expressed their anger at the club’s operation, with sections of supporters wearing masks as part of their “faceless” protest and whistling within the first 10 minutes.

Lyle Taylor scored the first goal of the game, but his team still fell to defeat

Despite the off-field problems, Lee Bowyer’s men had the best of chances in the first half as Kristian Pedersen and Onel Hernandez failed to hit the target from close range.

United thought they should have had a first-half penalty when Iliman Ndiaye went down following a collision with Teden Mengi, but referee Keith Stroud immediately dismissed the French striker’s protests.

After good work from Sharp and Sander Berge outside the box, the ball was slipped in for John Fleck, but his shot was blocked well by Pedersen.

Birmingham, who were unbeaten in their last three games before the contest, broke the deadlock on the hour mark thanks to their two recent signings.

Juninho Bacuna’s tricky shot into the middle of the park opened up space and he was able to pick Taylor down the left, with the striker taking his time before passing Wes Foderingham.

However, Paul Heckingbottom’s men leveled the score three minutes later. Good work from Fleck down the left made room in the middle for Berge to move freely in Birmingham’s half.

The Norway international slotted the ball behind the Blues defense and striker Sharp was there to score his ninth goal of the season and his 15th goal in 27 games.

United’s equalizer saw their pace increase and they should have gone forward when Fleck received the ball from the edge of the box.

A hopeful ball over the Blues defense was not dealt with by Pedersen and Ndiaye returned the ball to Fleck, but his shot lacked conviction and was easily saved by Neil Etheridge.

Heckingbottom’s side completed the turnaround in the 75th minute thanks to Bogle’s third goal of the campaign.

A neat exchange of passes including Berge, Sharp and Bogle saw the right-back push the ball under Etheridge from close quarters.

Blues boss Bowyer was shown a yellow card after the goal after expressing outrage at officials’ failure to penalize what he considered an offside foul before the winner.